Choose your weapon part 1; How and why composite sticks conquered hockey

Unless you playing days ended before the Great One skated his last lap around the ice then you know buying a hockey stick is no longer a simple process. With traditional wood sticks all but forgotten at the upper levels of the game we are officially in the composite stick age. With prices about to max out at around $250 for the highly anticipated RBK 9K sticks, not skates, have become the most expensive part of the game. So, how did we get here and what should you consider when purchasing a composite hockey stick? This week I’ll talk about the genesis and then we’ll talk about the good, the bad, and the ugly of purchasing a composite stick.

So, how did wood sticks end up becoming nearly extinct? Well, there are a few reasons including but not limited to the price of lumber. The average performance wood stick had jumped to over $20 and most closer to $30. Mostly it was an issue of consistency that led the revolution. The limitation of wood sticks at the highest level was you couldn’t control such variables as knots, dryness, and general quality of the raw ingredients from one stick to another. Another issue became players needing a stiffer flex often had to suffer through a stick that was heavier then desired. The first step towards composite was aluminum. If you played any time from the 80’s to mid 90’s you likely remember the aluminum shaft. This was great in that is was much lighter and consistent…well, unless it bent. Which they did. A lot. Trying to shoot straight with a bent stick is never a great idea. The n 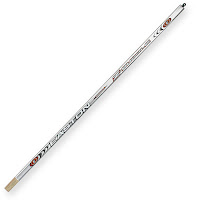 ext step was the composite shaft. The earliest versions were made through a process call pultrusion mostly used in the manufacture of boat masts. While this solved the problem of bowing and bending they had no play and were heavy. To me the stick that really changed the game was the Easton Z-Bubble shaft. The Z-Bubble incorporated a lot of golf club technology into the design figuring the swing of a club and a stick were pretty similar. What made this different was the taper at the bottom of the shaft. THIS was revolutionary. This created what was know as a focus flex region or, basically stated, an area of the stick that flexed back further and easier then the rest of the shaft keeping the head or blade behind the hands longer as well as explosive follow through. It was almost perfect except they had to deal within the boundaries of replacement blades with a square peg so they couldn’t mess with the geometry of the shaft itself too much (I know someone will mention the T-Flex shaft and blades which were really the true next step to the full composite stick but as it was generally considered a failure we’ll just skip over it). But change was just around the corner.

The full composite stick was the unicorn of the hockey world for several years. A lot of people will lay claim to the first full composite stick (my earliest recollection was a company called Busch which partnered up with everyone from Sherwood to Itech to get their product out there) but the hockey world simply wasn’t ready for a $200 stick. So, it was Easton, the leader in composite shafts and blades that finally broke through and quite by accident if you believe the stories. Stuck with the problem of showing around a prototype of a 1-piece composite stick that would retail at $ 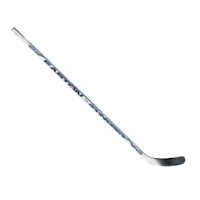 150, taking pre-orders, then not being able to produce the stick for a price that would make this price a reality. So, they went back to what was one of their biggest failures…yup, the T-Flex (see, you knew I mentioned it before for a reason). The end result was what has become known as a fused 1-piece stick. Basically taking a composite shaft with an ultra-long taper ending in an extremely narrow opening inserting a composite blade with a much shorter, much narrower peg and permanently bonding them together. Yes, this was the birth of the original Synergy. Now, to say it was an overnight success would be lying as sticker shock was still in affect. However, with improved looks, increased usage at the highest levels, and tremendous positive feedback, the revolution had truly begun.

Today there are hundreds of composite sticks on the market claiming different manufacturing processes, lightest weight, most durable etc. Several companies have even perfected the “true 1-piece” stick (not fused). But, nearly a decade later, the “mistake” Easton made in it’s latest incarnation as the Synergy Elite remains the most popular and best known composite stick in hockey